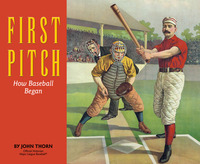 Review: The crowd goes wild in the bottom of the 9th inning when the home-team favorite is up to bat and a crack resonates throughout the park. As the heroes of young and old run around the bases, the crowd rises to their feet applauding the hit that won the game. It's difficult to not be affected by the fever in a ballpark. It's nearly impossible to ignore the excitement when a home team heads to the World Series. But, does anyone know how it all began? Unlike basketball, baseball "was not invented in a day, a week . . . . or a decade. It was not created by one person or even on small group. In fact, it was not invented at all; it changed, just like children do, in tiny, barely noticeable bits, along the way to being all grown up." Fortunately John Thorn decided that baseball fans needed to know the history behind the sport, so he wrote First Pitch: How Baseball Began .

Thorn takes readers through baseball's murky past and highlights the remarkable developments and alterations that have shaped baseball today. As a perfect way to engage readers, Thorn begins with a story - the tale of two Abners in Cooperstown, New York 1839. Thorn then takes readers through a historical look at the major events that shaped baseball today. He highlights the effect of cholera on athletics, as well as delving deeper into history - all the way back to the ancient world! But he then continues sharing fable and fact to finally uncover the best known history of baseball.

First Pitch: How Baseball Began is an enthralling look at baseball. Kids (and adults alike) will love to read Thorn's book because it is written in a youth-friendly style and is complimented by engaging pictures and artifacts. True baseball fans will love the depth of research and suggestions for further reading and research, but all readers will have a greater respect for baseball and its place as America's National Pastime. It is fascinating to see how so much of what people believed to be true about baseball's history is indeed fiction, but fortunately Thorn does an excellent job setting the record straight. Thorn was named the Official Historian, Major League Baseball - and after reading his work, it's clear that he has earned his title.

We would like to thank Raab Associates for providing a copy of First Pitch: How Baseball Began for this review.

Have you read First Pitch: How Baseball Began? How would you rate it?