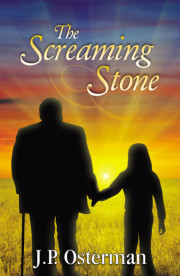 Review: Every family has secrets, but the McCarten family has a few more than most. Irish folklore combined with lies and secrets that span generations comprise J. P. Osterman's middle-grade novel, The Screaming Stone . Marcie and her older, teenage cousin Robbie have a wild sense of adventure. Longing to be future spies, Robbie and Marcie work together to uncover their family's secrets in hopes that by finding the truth they will one day bring peace and order to the McCarten family.

Dysfunction lies deep in Marcie's family. Her mother suffers from untreated mental illness causing her to be distant and abusive. Under the care of her grandparents, Marcie finds solace, but it is not enough. Robbie, her closest ally, is a socially challenged teen. Although his awkwardness drives her crazy, he is the closest thing she has to a real friend. As the entire McCarten clan gathers together after the death of a relative, Robbie and Marcie stumble upon a key that might just unlock the secrets that haunt their family and find enough treasure to save their family's land. By studying Irish folklore and embarking on a treasure hunt, Robbie and Marcie find much more than they'd expected.

The Screaming Stone is an entertaining read for middle school children. Osterman uses Irish folklore well in helping to create a fascinating treasure hunt. Certainly the primary storyline is suspenseful as Marcie and Robbie hunt for hidden treasure. But, the supplemental storylines are equally compelling. Marcie's mother suffers from mental illness, though it is a mystery as to the source of her problems. Late in the story it becomes clear that she is schizophrenic, but there is a turning point in her life that seems to have put her over the edge. Part of the mystery is coming to terms with Marcie's mother and understanding the lies that have created her past. Plus, Robbie's character is interesting as well. The book never reveals what is behind Robbie's awkward behavior and mannerisms, but he seems to be somewhere on the autism spectrum. He is highly creative and inventive, but lacks the social skills needed to function in regular situations. Overall, these unique characters along with the mystery and suspense make The Screaming Stone a good book.

Only a few elements of the story are somewhat bothersome. The time period of the story is unclear. Upon reading a novel such as this, it is automatically assumed it is current unless the author makes the time period evident. However, this is not the case here. For some reason, this was trying as a reader. It isn't until the book is nearly halfway over that it becomes clear that the story takes place in the late 1960's or early 1970's. This is evident when they visit the library and use the card catalog (something of which today's middle school students have no knowledge) and when they watch the Red Skelton Hour on television - which ended in 1971. It is uncertain why the author chose this time period for the novel, and for that reason it probably would be better received if it were current so kids could relate to the characters better. A time period for historical fiction should have a purpose. Plus, the inconsistencies in Robbie's character are frustrating. For example, he is clearly very bright and reads books from the adult reference section of the library, but yet he is unable to read common words. While in the library, Robbie says

"Here's a book called The First Book of Caves. The subject card says it has ill-us-tra-tra-"

"Illustrations," I said, reading beside him.

Robbie is too bright to not be able to read such a common word. His behavior is also very inconsistent, which could be related to his "issues", however since they are never really explained that is frustrating as well. Being that it takes place in the early 1970's, autism was not the common word that it is today which might explain the author's avoidance of labeling Robbie's behavior disorder. Plus, schizophrenia along with most mental illnesses was not as understood during that time period which might explain the lack of treatment Marcie's mother receives. But, in the end, these are somewhat trivial concerns because the mystery, family dynamics - particularly with the grandfather, and lore make The Screaming Stone a solid book for kids to enjoy.

We would like to thank Infinity Publishing for providing a copy of The Screaming Stone for this review.

Have you read The Screaming Stone? How would you rate it?